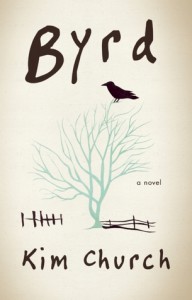 When we were younger, we all believed that we were meant to fly. The path that lay before us seem to be limitless and every nook and corner is a possibility and an opportunity waiting for us. As we grow older, however, we come to realize that not every path conforms to our original dreams and aspirations. Some paths lead us to disappointments and regrets, lost love and perhaps even broken friendships. We were also fueled with that reckless, almost innocent impression that whatever we do (or not do) will have consequences that will only affect us and no one else. In reality, this is not true as we will find out sooner or later. As they say, reality bites.

Byrd, Kim Church’s debut novel is a touching and life-affirming story that explores the all-too-familiar instances in which our secrets, actions and decisions shape not only our own lives but our loved ones’ as well. As the characters in Byrd will later find out, life can become unforgiving at times, and the past will always find a way to catch up with us.

In Byrd, we come to know Addie Lockwood and how her life intertwines with Roland Rhodes. Both of them have their own dreams about the life they want to lead, but neither of them makes mention of being together. Their friendship (I’m using this word on purpose instead of intimate relationship as their relationship seem to be quite vague even to both of them) lasts until they graduate high school. They then lead separate lives, trying to make their dreams a reality. When they meet each other again, years later, it leads to a pregnancy that Addie and Roland aren’t quite ready to deal with. While Roland provides a small amount of comfort and care, we come to know that it’s the only thing he can give to Addie. Unknown to Roland, Addie gives their child up for adoption. Mired in a feeling of pervasive loneliness and uncertainty, Addie tries to estrange herself from her family as she tries to make sense of what she has done.

Through alternating point of views, what unfolds is a story about the characters’ present struggles as well as their past. Byrd portrays a cast of characters that are as real as you and me, as well as circumstances that are almost too familiar, affecting us in many ways. While I sympathized with all the characters, I felt an unconditional affection for Addie. She seems to be craving for love yet she doesn’t know that when you force love into your life, it can escape just as easily. Perhaps she is trying to find someone to fill up the space left by the child she gave up. The letters Addie writes to her child made me sad for her and her child as well.

It may all seem too sad to read, but underlying all these struggles and regrets is the message of hope and love. It shows how dealing with life’s problems and accepting love from others (even if we think we don’t deserve it because of our past) become a testament to life itself. Byrd brings us a message that people will always have the tendency to care and forgive in spite of our past. There are lighthearted moments, of course, and while some of the letters from Addie made me sad, there were times too that her humor showed in her letters, and I found myself smiling (and no, Byrd is not an epistolary novel). I also like Addie because of her love for books and her music tastes. A couple of books (mostly classics) and songs were mentioned in Byrd such as Joe Cocker’s “With a Little Help from my Friends“ (I love this song!) and Joni Mitchell’s “For The Roses“, just to name a few (the rest you have to discover for yourself ;) ).

Kim Church’s writing is straightforward, meaningful and thoughtful. She handled the development of characters quite well as they try to deal with their issues. It took me some time to get used to the shifting point of views but for the most part the story moves along at a good pace. The author’s treatment of the characters and their predicaments were realistic and heartfelt so it was easy to sympathize with the them. I do not know what to make of the ending but I felt hopeful. I am being vague here but only to make certain that future readers will pick up this book to personally experience the story. I wouldn’t say I loved this book but I really liked reading it.

The heart and soul of Byrd revolves around the notion that our decisions and actions can affect other people, especially those closest to us, in more ways than we can ever imagine, but it also fills us with an overwhelming sense of hope. It seems to attest to the fact that life may not be what we always expect it to be, but when things become too difficult we will always have faith, hope and love to hold on to.