The Curiosity by Stephen P. Kiernan 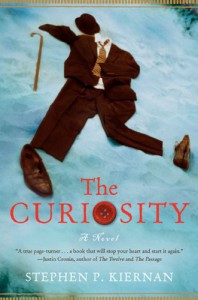 Mankind’s desire to answer the questions life invariably poses is usually fueled by wonder and curiosity. Much of what we know were born from the hard work and dedication of those who sought answers to simple questions. The knowledge humanity possesses now has brought forth advances that many people from centuries ago would not have imagined. While many discoveries have proven beneficial, some products of scientific discoveries have contributed to destruction and even the loss of lives. The Curiosity, Stephen P. Kiernan’s debut novel, tackles the fine line between the brilliance of scientific discovery and the ethical dilemmas we face in our pursuit of knowledge. For the novel though, the biggest question is: “What if we have the means to make death temporary?”

An expedition to the Arctic headed by Dr. Kate Philo leads to the discovery of a human frozen in an iceberg- a discovery that undoubtedly surprised and enthralled not only the scientific community but the whole world. Utilizing a scientific procedure called ‘reanimation’ the team of scientists successfully revives the frozen man (Jeremiah Rice). This success did not go unnoticed. The project was initially met with praise, but not everyone was thrilled. It was later met with skepticism, controversy, anger and protests. Surely a discovery of this magnitude will have moral implications. Those involved were even accused of playing God. Inevitably, Jeremiah Rice became a reluctant celebrity overnight and his very existence triggers a series of events that will change the lives of all those involved in the project.

The Curiosity was an engrossing read right from the start. The story revolved around the science of cryogenics, the individuals involved, and the assimilation of Jeremiah Rice into modern society. The realm of science fiction often turn people off (including me, sometimes), for many reasons, but The Curiosity makes for one readable science fiction book simply because it was handled and written well. Mr. Kiernan did a great job in carefully pacing the story and melding a variety of themes together. The extraordinary has somewhat become convincing, while never touching the edges of absurdity. The story is told with shifting perspectives and allowed the characters to present themselves through their inner dialogues. There are some deeply moving lines in the story especially from Jeremiah Rice but my favorites were his hilarious commentary about body piercing, camera phones and supermarkets, just to name a few. Once I started it was hard to put down.

Perhaps the greatest strength of the book lies within its believable and interesting characters. While some are extraordinary in their own ways, some are downright despicable. It is a perfect mix of brilliant minds, compassionate individuals, and obnoxious and sleazy characters. It’s no surprise that I found Jeremiah Rice to be the most endearing character. He is a man radiating with wisdom and integrity. His opinions about our modern world resonated with me.

Many underlying themes are incorporated in the book as well. While a large part of the narrative delved into science and the lives of those involved, it also explored relevant subjects such as ethics, religion, and the role of media in our society. In the novel, the author showed how influential and powerful the media is- it can twist facts and make people believe if it wants to. The book is never preachy though, and that’s the beauty of it. The author actually dares you to analyze these themes without imposing his own beliefs.

My disappointment lies in the ending. I usually don’t have any problems with ‘hanging’ endings because it leaves room for limitless interpretations, but for this story, I wanted something concrete and believable (unless there’s a sequel). It’s a subjective (and minor) flaw, of course. Some people might not find this too much of a problem.

The Curiosity by Stephen P. Kiernan is not your typical science fiction novel. It is a well-rounded and brilliant debut novel denying blunt categorization. Blending science, romance, suspense and drama, this book has underlying themes that will appeal to almost everyone. I enjoyed reading this a lot. I would gladly recommend this to book clubs and to individuals organizing readalongs as it has a lot of issues fit for discussion. Readers who find great pleasure in reading books that are thought-provoking will be pleased.

This book left me with a sense of life’s promises and paradoxes, while also confronting me with questions about what it means to truly exist in this world and how to lead a purposeful life. It also leaves a question for all of us to think about: “What are we willing to sacrifice in the name of science and discovery?”

>> READ NOTABLE QUOTES from this book in my blog