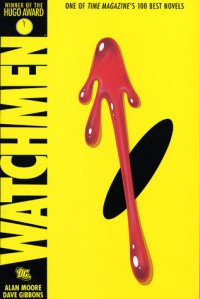 >> FULL REVIEW in my blog

The strength of Watchmen as a graphic novel lies not only in its great illustrations and story, but also of its treatment of masked crusaders and superheroes. This graphic novel did not aim to glorify their presence in the world. It focused on the dissection and deconstruction of masked heroes and superheroes, as well as the exploration of the paradoxes of their existence and purpose. Obviously there is a distinction between superheroes and masked ones, the latter as vulnerable as all of us, but possess the right skills and perhaps intuition to fight the bad guys. There’s something visceral and profound in the exploration of these lives. They are driven to defend people but also need to deal with their own lives and relationships. They are human after all – they may evoke power but they also have their flaws. Such complexities and quandaries abound not only in the characters but the events that transpire within the graphic novel. There are stories within stories, philosophical at times and full of symbolism. This is what makes it so deep and dense. I found myself going back to some pages to fully assimilate what is being said and where the story is going to.

There is also the dilemma everyone is facing, whether they are superheroes or ordinary people. Commentaries are not given sparsely. There is Rorschach’s psychiatrist and a newspaper vendor that lends more depth to the entire story by giving us their own observations not only of the characters but the world they live in. They give us an insight into the characters’ minds, revealing their reality and struggles while also discussing the more weighty subjects like war, child abuse and violence. Their voices ground you to the nature of being human just as much as the masked heroes’ lives.

Watchmen is a very complex and compelling story, well worth a second or even a third read. This graphic novel broke grounds when it was released and it deserves all of its accolades.

Should you read it?

“I’ll leave it entirely in your hands“

Full review in my blog